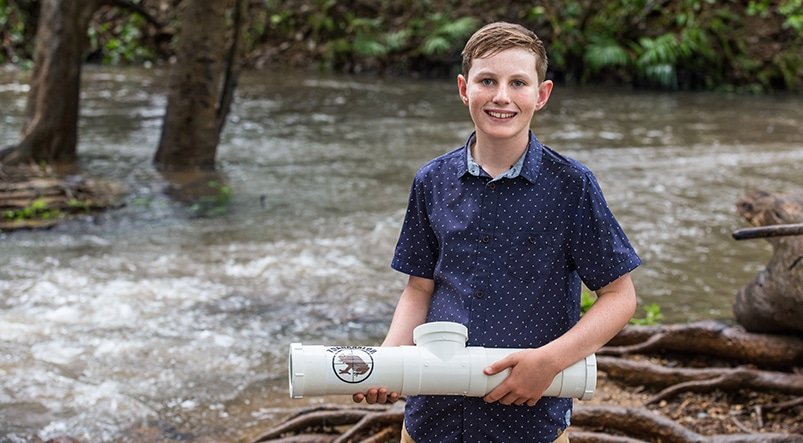 Our community is filled with amazing individuals who go above and beyond each and every day. We at PakMag are more than honoured to introduce you to three of these local legends, each from a different generation, whose unique contributions have a positive impact on our Cairns’ community.

Kelby Cifuentes – Inventor of the Toadanator

At just 11 years old, Kelby is already an entrepreneur and award-winner, thanks to his innovative Toadanator – a cane toad tadpole trap that could revolutionise our tropical north backyards.
Kelby lives with his mum, dad and younger sister, Isabella, 9 in Atherton. His idea for the Toadanator stemmed from his passion for catching cane toads. Which, let’s face it, is an activity many of us remember doing growing up.

“We have caught toads for as long as I can remember,” Kelby tells PakMag. “People laugh, but instead of Easter egg hunts we have a cane toad hunt. I guess it’s a family tradition.”
Kelby is well aware of the cane toad problem and would love to see the cane toad numbers decline. He invented the Toadanator as part at the Tablelands Schools Science and Sustainability Enrichment Program.

Tackling Toads One Backyard at a Time

The Toadanator works to trap tadpoles and prevent them from developing into cane toads. He tested his trap out in his backyard dam and recently took home the Tropical North Queensland Innovative Awards People’s Choice Award.

“I never thought my idea would have turned out this well, I was really surprised to hear I was shortlisted for two awards and was mind blown when my name was called out as a winner. I still can’t believe it!”

Through the local and media support, Kelby is even selling Toadanators to locals who are looking to reduce the cane toad problem in their backyards. Although Kelby came up with the brilliant idea, he explains that the Toadanator is a family project.

“Kelby has really taken this and run with it,” proud mum, Shannon explains. “Right from the start he has been eager to get the Toadanator to work – which it does. We are extremely proud of Kelby and what he has achieved so far.”

Alhough Kelby would love to take the Toadandator Australia wide, for now, he is focusing on helping those in Far North Queensland. To support Kelby and for more information on the Toadanator check out his Facebook page @toadanator.

As the manager of Ruth’s Women’s Shelter in Cairns, Lynelle is very familiar with the faces of domestic violence. With every woman who walks through the door, Lynelle’s mission remains the same – to help her break the cycle and make a fresh start for herself and her children.

For 32 years Lynelle has been involved in Ruth’s Women’s Shelter, a not for profit organisation that provides secure crisis accommodation for women and children escaping domestic and family violence.

Ruth’s was founded in 1977 with the foresight of four women – Ruth Thomas, Pat O’Hara, Joan Trewern and Jean Bleyerveld. Lynelle, a nurse and mum-of-three started with Ruth’s back in 1986 and since then has helped countless women escape a violent domestic situation and start again.

Providing Women and Children With Help and Hope for Change

For Lynelle, the reason for doing it is simple – to see the change in clients over time. Women and children that come to the shelter often remain there for four weeks to 12 weeks, even longer.

“They become part of us,” Lynelle tells PakMag. “You get to know the people really well and to see the change, well, this change is why we are there. It’s why we do what we do.”

Lynelle states that the shelter sees women from all different walks of life, but, for whatever reason, their choices are limited.

“A lot of women will say that it’s not just the physical violence. It’s that continued psychological violence – those put downs, the possessiveness, the jealousy, questioning all the time, the cyberbullying.”

Making the decision to walk out is never an easy one but Ruth’s aims to help ensure that women and children get the support they need to start again. They provide a safe place to stay plus all the basics that families need.
“Most women and children arrive at the shelter, usually with nothing at this stage.” Ruth’s Women’s Shelter is stocked with those everyday essentials – nappies, bottles, dummies, underwear.

In addition to the shelter, Ruth’s also runs a secondhand boutique where families can get clothing, toys and other essentials to start again.

Ruth’s wouldn’t exist if it wasn’t for the continued community support and they are always looking for donations. Along with the basic essentials – toothpaste, nappies, toiletries – the Shelter also accepts second hand clothes and toys in decent condition.

“Anything you’d give to your best friend, we would like,” Lynelle explains. As well, beds, cupboards, lounges, appliances – anything to help women move out on their own – are appreciated.

Ruth’s is also looking for corporate sponsorship from businesses in Cairns that can provide gift cards or passes to fun activities for the kids to do. For more information and to get involved, visit Ruth’s Women’s Shelter online or on Facebook.

Over the years there have been several stories written about the Piccone family and their contributions to the community. With every story told, it is the family’s strong work ethic and sense of community that consistently stands out.

Lou, and his extended family, run Piccones IGA Supermarkets among other Cairns’ businesses. But it’s the decades of dedication to the community that really make Lou Piccone stand out as one of the most respected residents of Cairns.

Before he got into the grocery industry, Lou was a respected mechanical engineer. He even wrote his thesis on the utilisation of solar energy for heating water in Brisbane and recalls suggesting to a local MP that a bill should be passed to ensure every new house built in Queensland had a solar hot water system. This was over 60 years ago and, although Lou has since switched career paths, it’s incredible to think what could have happened if he had remained in this industry.

After working as a research engineer in the sugar industry, Lou left to help his family run their business – a butcher’s shop and bakery in Edmonton. Never one to shy away from a challenge, Lou took the family business to new heights, leading to the development of Piccones IGA Supermarkets.

Lou, 84, credits his family and friends for helping him throughout his very inspiring journey so far. He has six children with his late wife, Elaine, and is also a grandpa to eight grandkids and two great grandchildren.

His extended family all still play an active role in the family business with his sons, Peter and John managing Differencethe supermarkets. The family also own the Hambledon Hotel and half of the Piccones Village, Pease Street in partnership with Lou.

For Lou, the reason behind his involvement in the Cairns community is simple. He firmly believes in the value of locals supporting locals. “I love people. I love serving people. All different characters. It’s just second nature,” Lou explains.

The Piccone family have spent decades supporting organisations in the Cairns community. Not only have they set up the IGA Community Chest and the Piccones Community Benefits scheme, but they have contributed to local organisations such as the Taipan Basketball Team, the Leukemia Foundation, the Lions, the Mayor’s Christmas Cheer Appeal and the Hospital Foundation. As well, they provide regular funding to local schools and sporting clubs, including St. Therese’s School and Hambledon State School.

Of course, the list of accolades continues for Lou. He has been recognised for both his volunteer and business endeavours on many occasions and was awarded Cairns Citizen of the Year and is an OAM recipient. He is also Patron of the Leukaemia Foundation, Patron of the FNQ National Servicemen’s Association, Patron of the South Cairns Cutters AFL Club and many more.

“I’ve been very fortunate in my life,” Lou admits. “I had a great upbringing. I married the woman I loved, I have beautiful kids and grandchildren and this town has been fantastic to me. I’m lucky to have some spare cash over the years and there is nothing better than to give some money back to the community that has always supported me.

I like to see people enjoy their life and I know that I can’t save the world but at least I can help.”