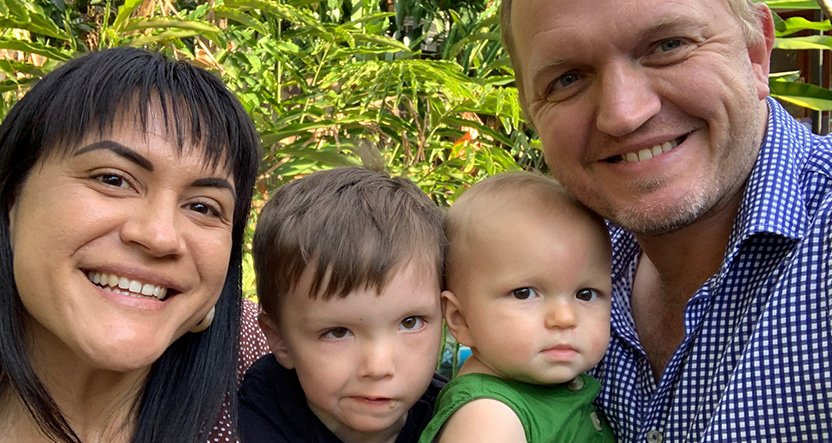 Meet mother of two Natalie, as she tells the story of her son George’s remarkable NDIS journey.

“My name is Natalie and I have two children; George, four, and Tiaki, nine months. I also have a fantastic partner named Dan. George was born with Moebius Syndrome, which is a very rare syndrome characterised by facial paralysis and clubfoot. He had paralysed vocal cords at birth and received a tracheostomy at two months old. These things affected his speech, eating and mobility. Seeing our little boy born with differences and hurdles was heartbreaking for Dan and I.”

“We’ve always had big dreams for George, and we’ve always dreamed that he would have a rich and fulfilling life. We have always sought out opportunities to support and develop George’s potential, but more often than not, we would come up against closed doors. As Moebius Syndrome is such a rare condition, George was unable to receive funding because he never met any of the funding criteria. His functional impact should certainly have met criteria, but the name ‘Moebius Syndrome’ was never on a list.”

“The NDIS is all about people’s functional capacity, and George finally met the criteria; however, I was nervous, because I had heard stories from people who weren’t getting what they needed from the NDIS. I’m glad to report that my fears were unfounded. Our ECEI (Early Childhood Early Intervention) Coordinator came to our house and really listened to our story and the dreams we have for George. It was like having a conversation with a new friend. Our ECEI Coordinator and I were emailing back and forth over the next few weeks as we both found new ways to support George’s plan.”

“When we received George’s plan, it was as if all of those closed doors were finally open. My son and my family now had possibilities, and I finally felt like I had some control over helping George to achieve his dreams. I called therapists that very week!”

The Changes for Our Family

“The greatest change has been seeing George become more confident, independent and brave. It feels as though the gap between him and his peers is narrowing. George has achieved so much already, and we are all so excited to see what goals we’ll be dreaming for him in his next plan. The NDIS has helped unlock the world for him, and his possibilities are now endless.”

No question is too silly, no concern is too great. We are here to support you. Contact your local ECEI team on 1800 860 555, or email us on eceicairns@missionaustralia.com.au