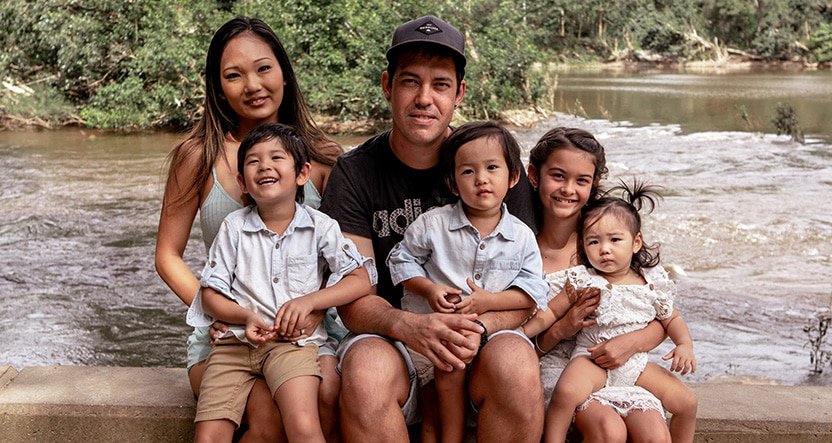 Cairns Families Who are Co-parenting and Killing It

Parenting isn’t easy. Parenting with an ex-partner after breaking up is often complex and most don’t do it well, because often there is a lot of hurt still being dealt with. This edition we wanted to inspire parents going through separation with stories of those who have managed to put their differences aside, for the sake of their children and future grandchildren. Meet two mothers who are “co-parenting and killing it”.

Yuri is part of a blended family together with four children, Ezekiel (four), Zachariah (three), Amelia (one), including one daughter from her husband John’s previous relationship, Aaliyah (nine). Eight years after separation and a number of ups and downs, the family has found the perfect balance.

Throughout the years, the family ran into some hurdles. “It was difficult when we were not all on the same page or there were miscommunications. However, we all wanted the best for our children,” Yuri told PakMag. “We realised that no matter what, our children’s other parents will always be a part of our lives as well. Once you say things to the other party in a harmful way, it’s always going to end badly.”

Eventually, the families found a great balance through communication and helping each other out. “It started when both exes got married and were happy for each other,” Yuri explained. “We all speak well of each other. We do each other favours such as have the kids last minute even though it’s not our week, and when you know your children’s other parents are struggling, you help them out.”

Yuri continues on to explain the importance of supporting one another. “If you know they’re going through a breakup, bring a box of chocolates to their house. If the other party is sick, buy some medicine for them,” she said. “We all get along very well so it’s always been pretty easy going for us. We even fell pregnant around the same time, which was an amazing bonding time. I’m happy to say my husband’s ex is one of my best friends.”

Today, the family thrives to help each other out and live in harmony. “My husband’s ex always compliments me and puts her hand up to be our last minute babysitter on our date nights. We go out and have fun together and we are like best friends, and all it is, is to be nice and genuine to one another.”

Yuri’s advice for other separated parents is “Don’t be sour to one another, don’t blame the children, and don’t use the kids to hurt your ex. It might be difficult in the beginning because you just broke up, but you have to put all that aside and be happy for each other’s futures. A little bit of kindness every day is what makes us such a happy family.”

Separation is never an easy road, but sometimes, you can make things work in the end. Jojo reached out and shared her story with PakMag on how they have made things work with daughter Mia, four years after separating from Dad Tim.

Over the years, there are a few things they had learned. “We both have similar values in regards to raising Mia,” Jojo told PakMag. “So, agreeing on what is best for her hasn’t been too hard. On the other hand, it was tricky to keep the lines of communication open without becoming bitter, unreasonable or making things personal.”

Jojo went on to explain that in the past 18 months, things have really started to click. “Time really helped. We’ve also had two face to face ‘meetings’ to discuss the big issues, and that really helped. Texting just isn’t the same,” she explained. “We alternate Christmases, which means one of us always has an early Christmas with her, as every other year she travels to New Zealand with her Dad to his family for a couple of weeks.”

Throughout the years, it has become apparent to Jojo that communication is extremely important. “Once we really got on board with the fact that all of this has to be for her and to benefit her, it became easier because we both have her best interests at heart. Try and keep your personal issues with your ex out of things unless your children are in danger, and if you can’t, seek mediation as early as possible.”

Jojo’s advice for other parents on the same journey is “You don’t have to be Demi Moore and Bruce Willis and play happy families, but it doesn’t serve anyone to be bitter and involve the children in your disagreements. I found it really helped for us to just keep reminding ourselves that everything was in the interest of what is best for our baby. You may not love them anymore, but you must have liked them just a little at some point, so keep that in mind!”

Co-parenting is no mean feat and it’s rarely a smooth road. You may feel concerned about your ex’s parenting abilities, stressed out about financial issues or feel worn down by conflict from the relationship. However, it is possible to overcome the hurdles and get to the point where you’re co-parenting and killing it.

Don’t be one of those families that are acting like you separated yesterday when it was 35 years ago. Whether you like it or not, you are going to be in each others’ lives forever, so you may as well make it pleasant for everyone’s sake. You have milestone birthdays, weddings, and future grand babies being born to look forward to. Getting over the hurt, treating each other with respect, getting on the same page, and parenting with a united front is key to being the best co-parents you can be.