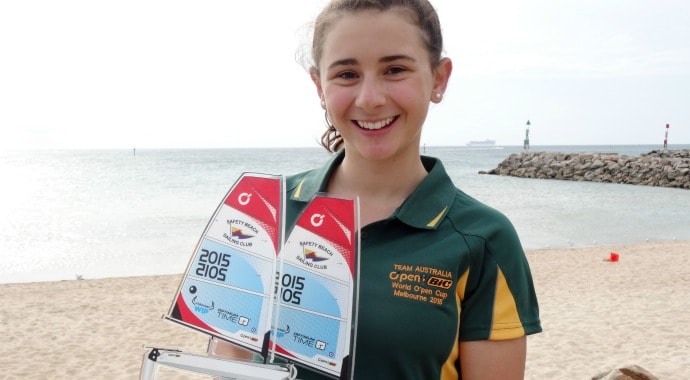 Not many 14-year-olds can stake claim to the title of four-time World Champion, but Atherton local, Kristen Wadley is certainly not your average teenager.

The motivated Atherton State High School student has been sailing for seven years and in that time she has won four World Championships in Miami in 2012, in Italy in 2013, in Germany in 2014 and in Melbourne in November 2015.

“It is still sinking in that at 14 years of age, I have managed to win four World Championships,” Kristen tells PakMag.

Just how did Kristen journey into the world of sailing and what is in store for this incredibly talented teen?

Kristen credits her dad, Roger Wadley of Tinaroo Sailing Club, for introducing her to sailing in early primary school: “My dad has sailed all of his life and ever since I started I’ve always felt at home on the water and sailing my boat.”

In seven short years, Kristen’s sailing skills have taken her around the world and back, competing with people who are nearly twice her height and weight. Clearly this hasn’t stopped Kristen, who explains that a typical race takes, “around 40 minutes” to sail three to four kilometres.

The passion Kristen displays for sailing is nothing short of extraordinary. In addition to meeting new people and travelling all over the world, Kristen explains that what really attracts her to the sport is the independence.

“You are responsible for everything you do out on the water. You aren’t allowed any help from your coaches so you have to make all the decisions on your own.”

Kristen trains three days a week with her brother, sister and dad, which involves “going out to Tinaroo after school to go sailing from 3pm until about 6pm.”

While Kristen admits that she does get nervous before a World or National Championship, she uses this energy to her advantage and relaxes as soon as she gets into the routine.

“I always really enjoy myself during the entire time out on the water. That’s what I think is the most important thing to be able to excel in any sport is to enjoy doing it.”

There is no denying that Kristen has a bright future ahead of her.

In addition to sailing, the Year 10 student also works part-time at Atherton Bakehouse as well as Atherton Gas & Camping. She is also active in swimming, Rhee-Tae Kwon-Do and loves reading. She is hoping to pursue a career in Sports Nutrition to “help other athletes reach their peak performance as well.”

Kristen was also recently awarded the Tablelands Regional Councils ‘Junior Sportstar of the Year’ at their Australia Day awards, for a third year in a row.

Recently Kristen started sailing a different type of boat known as a ‘Laser” through the Queensland Sailing Team which sees her travelling to Brisbane once a month for training with Queensland High Performance coaches.

While the training is intense and requires 110 per cent commitment, she isn’t deterred by distraction.

“It’s hard sometimes to go out if I’m feeling sick and it’s horrible weather but once I’m out sailing, I really enjoy it and am always glad I made the effort.”

Kristen sets sail for France in July to compete in her fifth world championships and admits she “would love to attend the Olympics in the Laser.”

We have no doubt that this incredibly inspirational teen will be sailing her way to more World Championships and waving the Australian flag in the not-to-distant future.